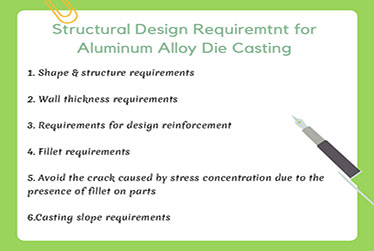 a. Eliminate the internal side concave;

b. Avoid or reduce the core pulling part;

The wall thickness of die casting is a special factor in the process of die casting. The wall thickness is closely related to the whole process specification, such as the calculation of filling time, the selection of internal gate speed, the calculation of solidification time, the analysis of mould temperature gradient, the effect of pressure (final specific pressure), the length of mould retention time, the height of casting ejection temperature and operation efficiency.

On the custom aluminium die casting, the connection between the wall and the wall, no matter the root of right angle, acute angle or obtuse angle, blind hole and groove, shall be designed as the round corner. Fillet connection is not used only when it is expected to be determined as the part of the parting surface, and the rest parts must be fillet generally. The fillet should not be too large or too small, too small customer aluminium die casting is easy to produces cracks. Too large is easy to produce porosity. Generally, the fillet of custom aluminium die casting is 1 / 2 of the wall thickness ≤ R ≤ the wall thickness; the function of the fillet is to help the metal flow, reduce eddy current or turbulence;

（5）Avoid the crack caused by stress concentration due to the presence of fillet on parts;

When the parts are to be electroplated or coated, the fillet can obtain a uniform coating to prevent deposition at sharp corners;

The utility model can prolong the service life of the die-casting mould, and can not cause the angle to collapse or crack due to the existence of the sharp angle of the mould cavity;