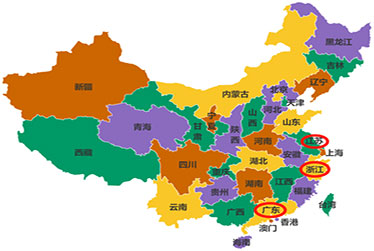 The global die casting manufacturing centre is transferred to the mainland of China. China's precision dies casting enterprises are mainly distributed in Guangdong, Jiangsu, Zhejiang, and other places. Most of the large-scale and specialized enterprises are concentrated in the Pearl River Delta and the Yangtze River Delta. Due to the dominant position of Asia, especially China, in market demand, raw material supply, labour resources, industrial chain supporting, policy support, and the rapid development of China's automobile industry, since the 21st century, the global die casting production has shown a trend of transfer to Asia, especially to the mainland of China, which is still continuing. The expansion of market scale and the entry of international excellent enterprises have promoted the technical level and management level of domestic die casting manufacturers, and further promoted the development of the industry. China has formed the Yangtze River Delta, Pearl River Delta, northeast three provinces, southwest region and other pressure casting industrial clusters, of which the Yangtze River Delta and the Pearl River Delta are the most prominent. The two regions have an active economy, developed supporting industries and obvious regional advantages.

Advantages of Aluminium Parts in Automobile

Under the premise of ensuring vehicle strength and safety performance, vehicle lightweight can improve vehicle power, reduce fuel consumption and exhaust pollution by reducing vehicle quality. Reducing the mass of different parts such as body, interior, and exterior decoration, power system and so on will help to reduce the energy consumption in the process of driving. Aluminium parts in automobile is light, recyclable and easy to form, so it is widely used in automobile body and parts. In theory, automotive aluminum parts can reduce the weight of steel cars by as much as30% - 40%, of which aluminium engine can reduce 30%, the aluminum radiator is 20% - 40% lighter than copper, the all-aluminium body is 40% lighter than steel, and aluminum hub of the automobile can reduce 30%. Therefore, aluminum alloy material is an ideal material for automobile lighting.