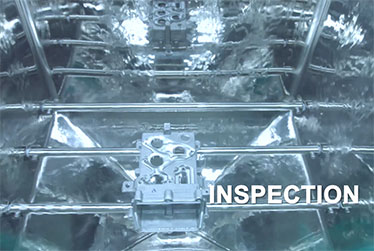 We usually use visual inspection. Visual inspection conditions: under the approximate natural light of 300-600lx natural light (such as the distance between 40W fluorescent lamp and 500mm). The distance between the examiner and the target is 600-650mm, and the viewing angle is 45-90 °. The visual acuity level of the examinee should be above 1.0 (including after correction).

Along the direction of demoulding, due to the adhesion of metal, the manufacturing slope of the mold is too small, resulting in the scratch marks on the surface of the casting, which is called the scratch surface when it is serious

There are obvious metal layers on the casting

There are straight or wavy lines on the surface of the casting, which are narrow and long, and tend to develop under the action of external force

The smooth lines on the surface of the casting are visible to the naked eye, but cannot be felt by hand. The colour is different from that of the substrate technology. It can be removed by a few strokes with 240 #sandpaper

On the surface of die casting, there are obvious, irregular and sagging linear lines (there are two kinds of penetration and no penetration). shape

It is small and narrow, and sometimes the joint edge is smooth. Possibility of disconnection

Most of the surface of casting has a smooth concave phenomenon

Marks left by extrusion during stamping or machining of trimming die

Deformation trace of the product surface and corner caused by collision

There are insufficient parts on the casting surface, resulting in unclear contour

Sheet metal or rough, sharp edges and corners appear on the edge of the parting surface

One part of the casting is staggered with the other part on the parting surface, resulting in relative displacement

The phenomenon of peeling off of casting surface and matrix

A spot on the surface of a casting that is different from the base metal, is usually formed by coating carbides

In die casting, because of the particularity of die casting, aluminium parts are formed under the condition of high temperature, high speed, and high pressure. So there are inevitable holes in the die casting. We call these holes sand holes.

In the process of casting solidification, the hole with dark colour and irregular shape formed by insufficient metal compensation is called shrinkage cavity

A hole like a defect in a die casting caused by entrapment of gas. Visual inspection or flaw detection after dissection. The pores have a smooth surface and round shape.